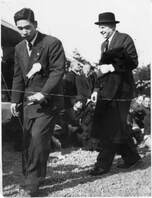 1952: Sato Sensei leading US Embassy Japan representative at Hibiya Park in Tokyo at the first post WWII budo exhibition
In 1951, a group of Japan's most prominent martial artists from a variety of disciplines gathered in November of that year to discuss the first, large-scale open demonstration of Japanese martial arts since the end of World War II. In January the next year, The National Japan Health Association was founded. It would later be called the Kokusai Budoin, International Martial Arts Federation.

IMAF was officially founded in January, 1952 by Master Kyuzo Mifune, Master Kazuo Ito and Shizuya Sato of Judo; Master Hakudo Nakayama and Master Hiromasa Takano of Kendo; Master Hironori Otsuka of Karate-do, and Kiyotaka Wake and Sueo Kiyoura. The first President (chairman) was Prince Tsunenori Kaya (uncle of Emperor Hirohito, and former lieutenant general in the Imperial Army), and was followed in 1965 by Prince Higashikuni (the first post World War II Prime Minister, the only member of the Japanese Imperial Family to have held this post).
​
​After the first exhibition in Hibiya Park in 1952, members of IMAF continued to promote the practice of Japanese martial arts throughout Japan. In 1953, the 2nd All-Japan Budo Exhibition was held in Okayama Prefecture, Japan. Spectators came from many cities to watch these prominent martial arts perform.
In 1958 the name Kokusai Budokai was adopted but later changed in 1965 to Kokusai Budoin Renmei IMAF, shortly after the 4th Annual All-Japan Budo Exhibition in Tokyo. Prince Higashikuni became the second President (chairman) of IMAF in 1965.

In 1968 Master Kazuo Ito and Shizuya Sato traveled to 12 countries promoting and demonstrating traditional Japanese martial arts. This was the first Kokusai Budoin World Tour. A few years later in 1970, the Government of Panama invited Master Kazuo Ito to introduce Judo to Central America. Since then, a variety of different Judo and Nihon Jujutsu styles have evolved throughout Central and South America. In 1973, Sueo Kiyoura (influential leader and son of Keigo Kiyoura- the 13th prime minister of Japan) was appointed the third President of IMAF.

IMAF continued to grow and spread the knowledge of Japanese martial arts throughout the world. And in 1975, the first international branches opened in Belgium, France, Great Britain, India, West Germany and the Netherlands. In 1976, delegates from these branches arrived in Tokyo for the 1st International Kokusai Budoin Conference. Three years later in 1979, the 1st European Congress was hosted in Paris, France.

In 1981 Denmark, Austria and Taiwan became branch IMAF Countries. Later in 1983, Gunzo Fukuhara (Former Cabinet Minister of Japan) was appointed the fourth President of IMAF.  The following year, the United States established an IMAF Branch and hosted the 1st IMAF Americas meetings & seminars in 1985, with Don Ivan becoming IMAF-Americas first President. In that same year, the 10th Annual All-Japan Budo Exhibition was held along with a celebration in honor of Prince Higashikuni's 99th birthday in Tokyo, Japan.

In 1986, Shinsaku Hogen (Former Japanese Ambassador to India and Deputy Foreign Minister) was appointed as the 5th President of IMAF. In 1988, Italy and Switzerland become IMAF Branch Countries, and the 7th European Congress was held in Torino, Italy with seminars in France and the UK.

Since 1995, IMAF Headquarters has sponsored tours featuring Branch Representatives worldwide. This is a special time for all members to get together, practices Japanese martial arts and share ideas in organization. Branches in Europe and the Americas have hosted numerous Exhibitions and Seminars throughout the following years. In 2000 Yasuhisa Tokugawa (great-grandson of the 15th and final Shogun of Japan-Yoshinobu Tokugawa and former Chief Priest at Yasukuni Shrine) begins as the 6th president of IMAF.

2002 was a very special year for IMAF. This marked the 50th Anniversary for the organization. With celebrations in Tokyo, several prominent guests from government, industry and the martial arts community in Japan attended along with worldwide IMAF members.